Congratulations! You didn't get suckered into thinking that you were looking for information about some kind of car. 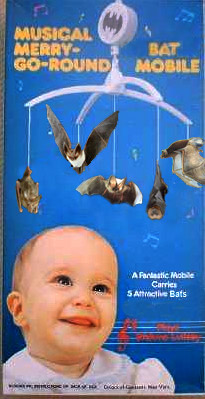 The second version of the bat mobile included a musical soundtrack, consisting mainly of Death Metal, as well as one extra bat.

“I wholeheartedly endorse this event and/or product.”

~ Oscar Wilde on the bat mobile

The bat mobile is a nursery mobile, that became highly popular in the early 90's, when a study showed that the flapping and screeching of live bats has a soothing effect on infants.

The invention of the Bat mobile[edit]

In 1989 the famous paediatrician Dr. Benjamin Spock discovered, by accident, the soothing effects of live bats on infants, when a bat flew in on one of his patients. He subjected various infants in a test group to live, agitated bats, and let several other infants in a control group sleep undisturbed. The results were astounding. While the babies in the test group slept peacefully without exception, several babies in the control group awoke at different times during the night.

Dr. Spock wasted no time in developing, and patenting his ideas for a bat mobile, to be hung over a baby's crib. By February 1990, one month after the controversial results had been published, the bat mobile was ready for mass production. It was an instant success and Dr. Spock appeared on many talkshows to promote his invention. The original version of the bat mobile contained the unassembled plastic frame, five wires, a hook for attachment to the ceiling, and four live bats. Due to its success a second version was quickly developed. This version included an extra bat and a small musical speaker that played soothing death metal, as the bats flapped and screeched over the calmly resting infant. Several themed bat-mobiles were also produced, including a Christmas bat mobile with lights, and a fourth of July bat mobile with fire works!

In 1992, a study was published, showing that stress-induced heart attacks from work and school among infants had increased by 465% since the invention of the bat mobile. The study also showed that fatal bat attacks among infants had increased by 510%. Dr. Spock quickly gave a press conference, stating that these results were purely circumstantial, and that the positive effects of the bat mobile outweighing the potential hazards had been proven scientifically during safety testing. A further criticism was that data regarding infant bat attacks and stress induced heart attacks from work and school before the invention of the bat mobile was remarkably sparse, casting some doubt on the result of the study.

Soon after, Dr. Spock's original study was repeated, leading to wildly differing results. Upon close review of the original study, it was shown that a small human error of suppressing the test results by hiring a one armed man to murder the lead researchers wife and pin it on him before he could blow the whistle had made a drastic effect on the outcome of the tests, leading to a factory recall to the guano islands that manufactured them.

Today the bat mobile remains something of a collector's item, in mint condition one can fetch over 3500 dollars on E-Bay for enthusiasts of hazardous childhood memorabilia.