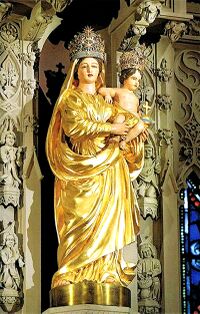 Barbie has had every job, including the mother of god.

Barbie doll worship is a very serious problem in today's society. In fact, just about every fifteen seconds, another child in the world succumbs to Barbie doll worship. Today, the ancient pagan plastic idol of evil has about 11.8 million followers between the ages of 15 and 24 alone! What can you do to help? Give me 1 million dollars! Learn all you can about this dangerous and nefarious form of pagan idol worship and, whatever you do, DON'T DRINK THE KOOL AID REPRESENTING HER SACRED MENSES!

Barbie was originally conceived in 1959 by former Nazi doctors now working for NASA for the less known "mind race" against the Soviet Union. The original idea was that since under Stalin's regime, the people were oppressed, the Barbie doll's flawless physique (her original design had breasts proportionately equal to 36L) would mind control via hypnosis from launching anything until after the staging of the Apollo 11 landing. This secret project was outsourced to Mattel, who simultaneously produced it in the USA as Barbie. The Russian model was given no name only a citizen identification number, and those found masturbating to it were promptly shot by Big Brother. In 1971 Nixon resurrected the plan to draw the public into a state of unaware shallowness and allow him to not be a crook. However, due to the intense public watchfulness, in addition to the intense use of hallucinogenic uppers by children and adults alike, its effectiveness was limited. The project was sidelined and largely forgotten, but in the 1980s Mattel CEO Satan found the plans, tweaked the proportions, and once again sold it to millions of eager young girls and boys. It has been reported that Sally Mallencamp, a 13 year old from Albany, New York sold one of her Barbies on Ebay for $500 when it was noted that she inserted the plastic fertility idol into herself over a hundred times before being impregnated by the plastic god.

Barbie's perfect dimensions have long been derided as "unrealistic" by feminists and ideal by platonic pornographers. Though her legs and waist would snap under the weight of her head and chest, compared to the bratz and monster high girls, Barbie is like a high class well educated courtesan.