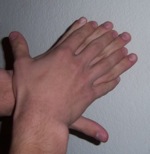 An adolescent awkward turtle revealing itself during an awkward situation.

The Awkward Turtle (mostawkwardus turtilus) roughly resembles two human hands laid on top of each other, with thumbs extended. They can vary greatly in size, color, and age, but most awkward turtles reveal themselves in their adolescent years, under the most Awkward of conditions. It is an incredible rarity to see an older awkward turtle, and the young are typically not ready to come out of hiding. When they do make an appearance, the awkward turtle will move its "thumbs" in the trademark rotational motion. This signifies that the turtle is alive and well, and that it is thriving on the awkwardness in the surrounding area.

The awkward turtle's habitat has recently expanded (presumably due to the housing bubble burst and/or global warming) to include internet chatrooms, Facebook walls, and text messages. In it's electronic form, the awkward turtle takes on the symbolized pseudonym of: >0< Beware that this should not be confused with the awkward snowman: >8<

The awkward turtle is usually a secluded creature, remaining hidden and dormant until its primary source of nourishment, awkwardness, comes along. It is able to consume awkward energy in any state, be it in the form of a vibe, feeling, mood, air, aura, or spirit. Even when awkwardness is in extreme proximity and abundance, however, an awkward turtle will only occasionally appear to show its satisfaction.

Because of their incurable biases, the so-called experts at Wikipedia will probably never have an article about Awkward Turtles. We are sorry for their blatant retardedness.

Awkward Turtles are most commonly seen in particular situations involving adolescents or young adult humans, when high levels of awkward energy are produced. The number of situations where awkward energy can be produced is infinite, but the following are a few generic examples:

- Your ex-girlfriend and her new boyfriend start making out right in front of you.

- You lie to your parents about your whereabouts, only to have your position compromised by someone shouting "CHUG!".

- Someone you really don't like asks you out to Senior Prom in front of 50 people.

- Someone tells an extremely bad joke, and there is silence for more than 5 seconds.

- Someone randomly begins to completely undress in public.

- A straight person is kissed by someone of the same sex.

-The boy you like rejects you every day when you ask him out.

It is important to remember that these are by no means the only situations in which an awkward turtle can appear. They thrive on all forms of awkward energy, so any awkward situation can suffice.

Awkward Turtles in the Wild[edit]

Awkward Turtles are primarily domesticated animals, but in recent years endeavors have made to reestablish their presence in the wild. They are not indigenous to any particular geological or environmental region, being able to thrive in any awkward locale or situation. As such, it is possible to see an awkward turtle almost anywhere, so long as the necessary level of awkwardness is present. Switzerland, for example, is an excellent place to spot an untamed Awkward Turtle, as it is so antisocial and shy, or Poland, for its tendency to be overrun and conquered.