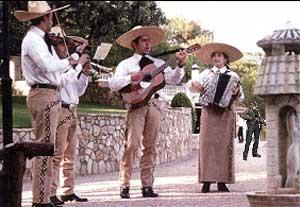 Recent US Intelligence sources have revealed that all-star top-selling boy-band Al Qaeda, recently featured on the hit TV series Allalabad Idol, has been holding open auditions in the deserts of Somalia. You may know the group from their recent hits such as "I'd Rather be a Taliban," "I Left my Goat in Pakistan," and "I'll Smear my Guts on Your Windshield if You Give Me a Quarter."

The sources also suggest that the "auditions" may actually be violent "hazing rituals" meant to "weed out the men from the infidel wussy-boys." Several failed "wannabes" have returned from the audition site psychologically scarred and brutalized, with painful welts on their thighs and buttocks. Documents leaked to Uncyclopedia reveal graphic details about the alleged rituals.

Details of the Initiation Rites[edit]

Wannabes are required to:

Recent news from the Pakistani border: A recently de-polyped boy-band groupie reports that Al Qaeda has released a new single, "I Like it Chunky-Style," available soon at pet stores and farms near you.