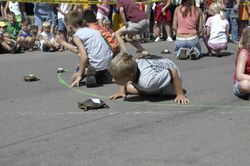 Often revered as a dangerous and illegal sport, Underground Turtle Racing was reportedly the inspiration for the film the Fast and the Furious

Underground Turtle Racing is a neck to neck and often dangerous extreme sport, and is banned in most western liberal countries, as well as countries under Islamic rule. Interestingly however, it is not banned in Cuba.

Underground is nothing like conventional turtle racing, which consists of a circle, and clean (i.e, not on steroids) turtles.

The sport of turtle racing dates back to the 1st Century A.D. where Romans, weary of having to find a pair of dice to roll, would race turtles instead of casting lots to gamble. The availability of turtles suitable for racing made this form of gambling an almost instant hit across the globe, despite the difficulty in catching the speedy turtles and the high risk to human life in their capture and training.

In the early 1800s, King George III of Britain, a notable animal lover and gambling afficionado, deemed that turtle racing must be regulated and monitored, and established the Royal Association For Turtle Welfare And Gambling Societies (RAFTWAGS). This organization eventually became the International Turtle Welfare And Social Gambling Association, York (ITWASGAY), keeping its headquarters in England, but serving as the global authority on Turtle Racing-related activities. Gambling associations from all countries globally that supported Turtle Racing became members and unlicensed and casual turtle racing became outlawed.

In the early 1960s, documentary filmmaker and vehement anti-hippie advocate, Robert Drew produced and distributed the film Green Asphalt, a collection of several short, but brutal, illegal turtle races filmed as a protest against the eco-friendly hippies who were dominating popular culture and society. A subculture of young, eager turtle racers who called themselves "Turts" was created almost overnight on its release. Robert Drew can be considered the father of modern underground turtle racing.

Underground Turtle Racing requires 2 or more turtles, sometimes up to 8, who are placed on a long piece of track, usually this consists of wood and perspex walls, as due to their insane speed, Turtles need to be guided along the correct path, and to ensure that nobody is hurt.

The turtles are placed on a starting line drawn with the blood of the deceased losers of the previous race that is not to exceed 2 inches in width. Once the ultra low frequency gun is fired that only turtles can hear, they begin a vicous and often nail biting race towards the finish line. The turtles must penetrate a barrier of plexiglass placed just in front of the finish line to cross the line and be victorious. A turtle can also be victorious if it is the last turtle alive. Should more than one turtle be alive after the race has endured four hours, the last turtle that has not resorted to cannibalism (auto-cannibalism included) shall be deemed the victor.

Over the years there have been many critics of Underground Turtle Racing, most notably from the Prince of Wales. But since he already opposed a lot of good stuff, his opinion doesn't count.

The sport of Underground Turtle Racing was inspiration for the video game Midnight Club, and the film the Fast and the Furious.

In 1984, the Teenage Mutant Ninja Turtles were published in mainstream American comics in response to the rise in Underground Turtle Racing in urban areas. The comics were created to educate the public that turtles were useful for more than just brutally violent races to the death, like fighting crime and ordering pizza.