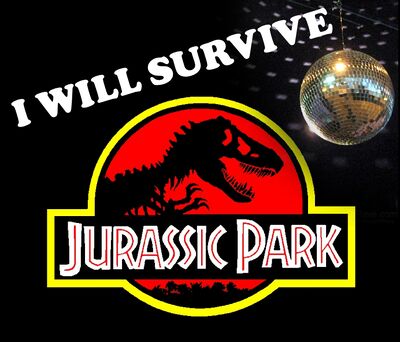 At first I was afraid I was petrified

Kept thinking' I would never live unless I tried to hide.

But you could smell us in the car

And you thought we’d make a meal.

Right. So you’re back, from outta time

They brought you back from fossilized mosquito DNA

Go on now go! Run for your life!

Weren’t you the one who tried to eat me once before.

You all look the same to me!

Oh no, not Raptors! I won’t survive!

They learned to open doors and now they’ll eat me alive.

I’ve got about 3 minutes to go

And I’ve got next to no ammo.

It took all the strength I had to not just pass out.

Kept trying hard to keep the strapping on my mauled-up leg.

I spent most of the night, trying to simply stay awake.

And not make a noise.

Oh, they see me! Something to chew!

And I’m not that crappy dinosaur feed they’re so used to.

They’re advancing on their prey

And I’m spending all my praying on what’s about to prey on me!