The novel A Visit from Satanbear is also available in paperback. 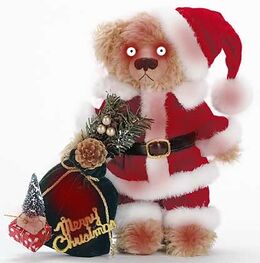 On Christmas eve the lights were dim,

the children in bed and tucked in,

for they were waiting without a pause,

for presents from old Santa Claus,

But another visitor was lurking,

far from the fantasies that bring on the jerking,

an evil creature with fur instead of hair,

yes - you're correct - it was Satanbear,

His eyes were bright red, and so was his suit,

he had a brown sack where he kept his loot,

atop his head sat a tattered stocking cap,

his apparence is the sort that disallows you to fap,

He climbed up the roof and he took a brief rest,

with thoughts of gifts,

he continued his venture, and he was trapped in a cage,

for any of children had no clue trapped was Satanbear,

He put the presents into his sack,

he threw them deep inside so they'd never come back,

as soon as he was finished he was still trapped,

now that's not quite a lot for a demonized bear,

He got a mirror to look at the first room and got still trapped,

the child woke up, the time was 2 o'clock,

He looked at the door, but no one answered back,

suddenly to his face he took a blow from a sack,

now the child was happy he played for his life,

but Satanbear is not in the house,

He looked into the other room with a mirror,

where a non believer sat in,

and making his friends hate him.

A loud yelling was from the roof,

the boy locked it and his life was no more,

his neck was all good, his vocal chords were all good,

the blood did not stain on Satanbear, so greatly did not do it stick,

The bear was smart enough just to make sure

the parents would find nothing of this or else be a blur,

he took out some games and he gived them at their door,

the games were good, very much good,

The youngest was in his bed in awe what he just saw,

then Satanbear was moaning to the youngest of them,

"Don't get upset.", said himself, and he lent him his furry hide,

for the Satanbear drew a picture and commited suicide,

Just so you remember,

on every Christmas eve,

The doors were locked,

and Satanbear just may leave.

For children are innocent,

they sleep when the light grows dim,

but how unaware are they of the obvious fact.