Hans Peter Hackner and his Company: The Hackners Family

Extremly famous in Germany - not only for their beauty - but for their wonderful Wurstprodukte, The Hackners are the most important brand for Naturdarm in Germany.

Not well known to non-Germans is - that all Germans prefer to eat Pansen, not Bratwurst. This led The Hackners - who support the German love for Pansen - to raise a multi-million-dollar-company, which,nowdays - also controls large parts of German Politics.

The master-chief and mastermind of the company - Hans Peter Hackner - gives his success prescription: "The Geniesser knows that quality sausages are in the nature intestine (german: Naturdarm) and this for more than 2000 years." Refering to these "2000 years" -it is said that even Jesus ate Pansen during The Last Supper.

The Political Power of the Hackner Family[edit]

The large influence of the Hackner Family on German lifestyle and politics led to the founding of the R.A.F (Rote Armee Fraktion) down in the sixties. In 1976, Andreas Baader, being asked why he decied to become a Terrorist replied:

"We could not longer accept to live in a system that is called a democracy - but in fact is only a dictatorship controlled by some Naturdarm-Moguls from Crailsheim . Where our kids play Naturdarm. Where the woman wear Naturdarm. That was much more than we could take."

Many modern historians agree with him. Since the Hackners control 60 % of the print media and 60 % of the televison - they have a lager influence on what the Germans think and do - than anyone else, including Angela Merkel.

Depite of being in control of such large parts of Germany - the Hackners are still loved by everyone all over the country. In fact - they do only use their power to raise their Pansen sales figures. As pansen is the most consumed product in Germany since the downfall of the Third Reich, it is no wonder that they are loved by nearly everyone. 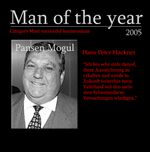 In 2005, the Linkspartei.PDS (Leftwing-Party. Pansen des Deutschen Sozialismus) entered the Bundestag. It is said that they will try to implement a new economic system - that is largely based on the producing of Naturdarmprodukte. Since so many Germans are unemployed - it is possible that someday in the nearer future the Germans will call a Hackner their chancellor.

History has proven that unemployment leads to economic changes. In the past - there were already 2 economic/political/social systems that were based on Naturdarm,called Pansokratie, one in central China and one in Hungaria. These two system existed for more than 200 years.

During this period - the unemployed rate of these countrys reached nearly 0. However, both of these system were destroyed by either forces of nature or other countries.

Because of a food poisoning katastrophe in central china, nearly all inhabitants of the local Pansokratie-Government were infected with diarrhea and shit themselves to dead. The Pansokratie in Hungary was whiped out by the local Peace Movement - simply because they disagreed with the idea that the love for Naturdarm will bring peace all over the world.

These trials show that a Pansokratie IS possible. If Hans Peter Hackner succeeds with his idea of a Pansokratie in Germany remains to be seen,but is quite possible. 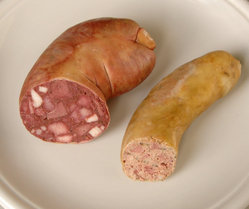 The Hackners think about different use of german sausage. In the past they supported some disputed and - because of their manipulating effects on the folk - criticized projects like Wurst für die Welt a decentral organization with the intention to monopolize the world-wide sausage market.