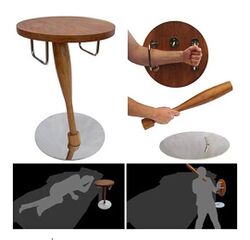 Tools of the trade.

Shelf defence is discipline of martial art from antiquity. It is most commonly taught as hitting somebody around the head repeatedly with a large wooden board. Normally about 140cm x 100cm in size. Shelf defence is well known for its many subdivisions, including the less publicised sport of Karate.

It is thought that shelf defence was founded by Benedictine monks who without any other weapons were able to repel large invading forces of invading Vikings using only the structures they kept their books on. Over the years it has been taught as a martial art to those who are in short supply of traditional weaponry, but have an abundance of certain types of household fixtures. It has been subject to many developments and changes, including the additional use of worktops, hanging baskets and more recently and more controversially traditional English sideboards.

As mentioned above, the art ranges over many countries. Although some Americans argue that the art was founded in America (the shelf being replaced by a 2x4), evidence suggests otherwise (archaeologists recently found Jurassic period crocodile with a large wooden board lodged in it's skull). Most Americans still refuse to believe the evidence and have alienated themselves entirely from the Australian version (many are even unaware that the Australian version exists), developing it in their own style. 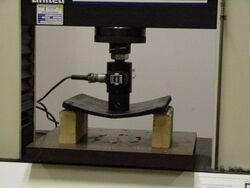 One of the more modern military grade units under test. (Ikea).

The weaponry itself usually consists of boards. Big ones. The area of an average board is usually about 14000cm2, all though, by official competition rules it can vary to within 1000cm2 depending on the size of the user. The boards have to be specially made, non-official boards can be used if they are the right size, although it is is frowned upon. The non-official boards are not to be used in competitions, and it is generally accepted that you are less likely to be put forth for a grading if you use a non-official board. As such, the martial art asks (very demandingly, some may say) for complete and utter dedication, because a board is for life, not just for Christmas.

As well as variations per country, there are also many different "disciplines within disciplines" to be learned. These include the teaching of different styles of techniques, including smashing the neck with the side of the board and jabbing the attacker's eye out with the corner. These vary with the teacher, but of course there are a group of "core" techniques taught in all classes. These include:

The Scandinavian version tends to use tall hair as a way of blocking the opponents attack. Usually a female sidekick to the abdomen will render the opponent helpless, while the male's audiative attack block any competing tunes for long periods of time. There are 5 attack modes: