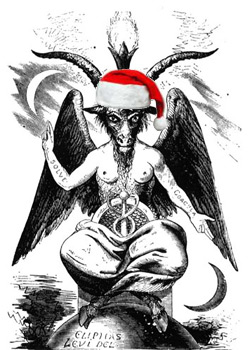 "Ho Ho Ho, the number of the beast" - The "nice" often tattoo this image upon their left shoulders

Santaists are collaborators and sympathizers who support the evil goals of Santa Claus. Considered public threats in the nations in which they live, they lead highly secretive lives, hiding their allegiance to Santa throughout the year, emerging only during the Christmas season to terrorize their neighbors. These cultists leave presents for him in their homes in order to signify their allegiance to his cause, and are thusly spared from the yearly massacre.

The term "Santaist" is actually a colloquial one used by those unsympathetic to Santa's goals. In the North Stripper Pole, the military and propaganda services who clandestinely support worldwide Santaist cabals have traditionally called them "Red Shirts", after the red tunics modeled after Duchy military uniforms that they wear. Santaists refer to themselves as The Nice. They are often confused with Satanists, though no relationship between the two groups has ever been established. So far, there is no provable like between The Nice, and the scientifcally proven Red Shirts phenomenon.

The arch nemeses of The Nice are the enemies of Santa, collectively referred to as "The Naughty". These fearless defenders of freedom have led the fight against Santa since the mid-1920s, and their successful repulsion of Santa's armies every year has fueled an unparralled hatred.

The catchy, intimidating songs sung by the Nice are called "Carols," and the practices associated with the singing of these songs, whatever differences may exist between various regions, is known as "Caroling".

Just prior to Christmas, The Nice organize into tightly regimented mobs, and in militaristic fashion, they march through local neighborhoods and enclaves known for their populations of Naughty people, singing carols, and often stopping at individual houses in order to sing directly to the owners. Frequently, they will provoke fights with random passers-by, and commit acts of wanton vandalism against shops and businesses owned by The Naughty. In the weeks prior to the season The Nice will mortify their flesh by exposure to cold as a means of pennance.

Carols are well known for their memorable melodies, and the brutally fascistic lyrical content that promotes the despotic and racist views of Santa. Some well known Carols include:

These songs proclaim the omniscent reach of Santa's intelligence services.

This song explains the computational power of Santa's intelligence and navigational computer, while at the same time giving the listener an apocryphal origin story for the development of the computer's powerful A.I..

A song about the thousands of dead bodies abandoned in the arctic wastes in the aftermath of Santa's rise to power.

The recruitment jingle for the North Stripper Pole's military, it describes how even the uninvolved families of Santa's opponents will destroyed under the steel boot of Santa's military machine.

Unsurprisingly, Caroling has been linked to outbreaks of violence, racist defamation of property, theft, and in some cases even mass killings in the weeks leading up to Christmas.

As a payment of tribute to their master, Santaists leave gifts out on Christmas eve, so that He will know that he is in the home of his follower. These gifts are meant to symbolize some event in the history of Santa's rise to power, similar to the meaning of hamentaschen in Judaism. The most commonly given gifts are:

Of course, everyone knows that Cookies and Milk were also the traditional food of the Elves before Santa's arrival. Santa Adopted these foods as his own to signify the Elves' absorption into his new State, the Duchy of the Arctic Circle.

Additionally, adherants may present confirmed kills from Santa's enemies' (also called "naughty") List. During the normal year, "naughties" who are murdered can be redeemed at the North pole by their assassins, for cash or a commission of officer rank in the Duchy's military. On Christmas Eve, Santa's followers give these victims freely, as a show of their eternal loyalty.

It is currently unclear what the fate of the “nice” will be, should Santa achieve his goals, though Santa researchers, who have not been summarily executed by the Snowy Lord, theorize some form of ghastly slavery.