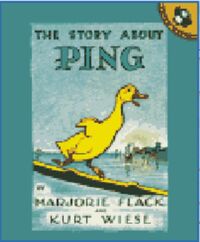 Cover of the hardcover edition

The Story About Ping is the self-referential title of what is now acknowledged to be the greatest allegorical novel ever written in the English language. First published in 1933 as a story about a domesticated Chinese duck lost on the Yangtze River, this heartwarming tale with its colorful illustrations has entertained millions of children and simple folk for over three generations. The book's deeper allegorical nature was revealed in the year 2000 by a reviewer on Amazon.com named John E. Fracisco (not his real name), whose trenchant analysis has become the highest-rated review in the history of review-rating (97% favorable on almost 10,000 ratings as of 2009).

The Story About Ping was written by Marjorie Flack and illustrated by Kurt Wiese. First published in 1933, it is now in its 17th edition and 23rd printing by Viking Press in hardcover and Grosset & Dunlap in paperback.

Ping is the name of a domesticated duck who lives on a riverboat on the Yangtze River in China. He gets sent out every morning to forage along the river with his relatives, and is expected back every evening. <<SPOILER ALERT>> One day he gets separated from the other ducks, and gets lost.

To reveal another sentence of the story here would not only be a violation of copyright (the book is that brief), but a betrayal of the trust of children and simple folk everywhere. The sophisticated reader can perhaps divine what happens next from the description of the book as "heartwarming". It can also be stated that, when made into a movie (animated), the legend No animals were harmed in the making of this movie. appeared among the trailing credits.

From its beginnings in the 1950's, with lots of static and Indian head test patterns, television and Ping have been inseparable. Captain Kangaroo (or his beloved friend Mr. Greenjeans) read Ping once a week on his show for seventeen years, while displaying its colorful illustrations in stark black and white on the screen. Only "Stone Soup", "Mike Mulligan and his Steam Shovel", and "The Little Engine That Could" had longer runs on the show. Soupy Sales and Howdy Doody both featured Ping on numerous occasions, and Shari Lewis's sock puppet Lambchop once played the role of Ping in an adaptation for sock puppets and ventriloquists.

On January 25, 2000, someone using the nickname John E. Fracisco (not his real name) wrote his very first review on Amazon.com. And what an amazing review it was to become! The heretofore simple story of a Chinese duck named Ping was revealed to be a presciently oblivious, nearly complete expert treatise on the well-known Unix networking command named ping. The ping command sends out a flock of packets [ducks] to forage on the network [Yangtze River], expecting them to return on schedule. Sometimes, one of the packets [ducks] doesn't return. To reveal any more of the operation of the ping command would ruin the livelihood of many highly paid networking gurus, and in any case would require a vocabulary that is inappropriate for a family-oriented publication such as this. Suffice it to say that the modern Internet would not exist in its present form were it not for the ping command, and that the entire operation of that command is explained in the Ping book.

In the long history of reviews, there have been more than a few instances where a reviewer added ground breaking new analysis to an original work, as "John E. Fracisco" did with Ping. A well known example is Keppler's review of Newton's Principia, in which he applied Newton's gravitational formulas to explain the elliptical orbits of the moon and planets. For this clearly derivative achievement, Johannes Keppler was nominated for a Nobel Prize in Physics, an honor which Newton himself never received in his lifetime.

However, in the long dark age when reviews were presented orally or in newspapers or on radio or television, there was almost no opportunity for the art and science of rating to arise. It took the simultaneous arrival of a new millennium along with pervasive access to the Internet for review-rating to reach critical mass, and then to explode in a fireball of activity. Today, rating performances and reviews has become one of the developed world's most popular pastimes. Web sites like amazon.com, epinions.com, newegg.com, and slashdot.com have become synonymous with rated reviews.

It is therefore somewhat surprising that, while performance-rating television shows like American Idol claim to receive over 20 million votes in a single week, the highest total number of votes received for any English-language review on the Internet over the past eight years has yet to exceed 10,000. This should in no way diminish the achievement of "John E. Fracisco"'s review of Ping on amazon.com, which has for the past five years retained the title of highest-rated review ever.

Having revealed the inner workings of the most fundamental piece of networking software almost fifty years before that software was written, the authors and publishers of Ping have faced an unrelenting barrage of patent and trade secret lawsuits over the past eight years.

In 2002, U.S. Vice President Dick Chaney denounced Ping as "a textbook for cyber terrorists". Barnes & Noble and Amazon both immediately removed the book from their shelves and web sites, but it was quietly restored upon Barack Obama's election to the presidency in late 2008.

In an effort to prevent further inadvertent breaches of network security from occurring within its borders, the Chinese government in 1994 (before anyone realized there was a breach) began work on the Three Gorges Dam, which will eliminate all riverboats and their attendant ducks from the Yangtze River when it is finally completed in 2011.

The outsize ratings for his very first review had a deleterious effect on "John E. Fracisco"'s reviewing career. While three more reviews under this User ID were published on amazon.com in 2000 and 2001, none of them attained anywhere near the success of his review of Ping. Not a word has been heard from Mr./Ms. Fracisco (not his/her real name) anywhere on the Internet since 2001.