Ovine (of or relating to that most amorous of the hoofed mammals, the sheep) sexual preference is a field of human knowledge long understood by New Zealanders, Greeks and the Welsh, and is the subject of a rapidly expanding range of scientific research. Sheep sexuality and human sexuality have never been more intertwined than they are today. By studying the sexual preference of sheep, researchers hope to uncover the secrets of sexual preference in humans, dolphins, and that one really sexy goat that lives in the yard down the street and gives you a knowing wink when you walk by on your the way to the grocery store. 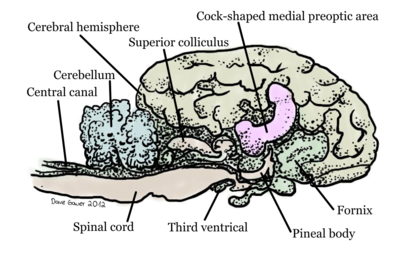 An (extremely excellent) illustration of a sheep's brain showing the cock-shaped medial preoptic area (CSMPA). The CSMPA controls the sexual preferences of male and female sheep.

Sheeps brains are relatively simple structures with eight distinct areas. The sheep brain averages 8kg in weight and rarely fits properly in the ill-formed sheep skull. Sheep brains are best served breaded and fried (sadly the sheep brain is far too fragile to be served on a stick like the popular fried treat, pig-brain-on-a-stick) or cold on a platter in an intimate setting with an attractive potential lover. While tender and juicy, sheep brains typically need to be accompanied with a sauce. Spicy and vinegary sauces are best, but be careful not to overdo it or you may overwhelm the delicious flavor of neurons. The smell of cooked sheep's brains is very similar to bacon, but don't be fooled - you absolutely cannot, must not put it on a sandwich if you have any self respect or pride. What would the others at the country club say about you behind your back? It's enough that you were caught with that new tramp of a waitress. Not that she wasn't asking for it, brushing her breasts against your shoulder and letting her skirt ride up on her hip while reaching to take your menu.

The sexual centers of the sheep are scattered about. The distribution seemed random and structureless to early researchers, but a pattern did eventually emerge. Sheep senses trigger sexual response directly in the cerebellum. Signals are sent to the spinal cord to activate sexual responses in the sheep's body such as the release of pheromones, changing the vocal cords to allow for a deeper, more throaty 'baa', and the deployment of the sheep's mating claws. The fornix controls the transmission of sexual images and smells to other parts of the sheep brain. Images of healthy adult sheep, closeups of wool, and lingerie all light up the fornix under an MRI.[1] Pheromones, candle light, wine, and soft, jazzy music can all trigger sexual responses in sheep. Then again, so can grassy pastures, a quick run through a stream, the written work of John Updike, and a firm slap to the buttocks. Like humans, the cerebral hemisphere is able to imitate many of the hard-wired responses which occur in the rest of the brain. This allows sheep to daydream about sexual conquests in a way that actually causes sheep erections and the secretion of lubrication in the sheep vagina. While no one knows what a sheep's fantasy might be like, it probably involves making sweet love to another sheep under the starlight while gently rubbing wooly bodies against each other as wave upon wave of pleasure overtakes them and carries them away to a blissful slumber together. In this way, sheep are much like you and I. But you don't see sheep building bridges or putting one of their kind on the Moon, do you? So we've still got that.

The sheep's sexual preferences are determined by the cock-shaped medial preoptic area (CSMPA). The CSMPA intercepts imagery directly from the eye and uses it for sexual selection before passing it on to the visual processing and cognitive areas of the sheep brain. Though the CSMPA has primitive visual processing abilities of its own, they are not nearly as advanced as the primary centers. It is for this reason that sheep are prone to having sex with the very items and predators that their brains would otherwise know to reject. Sheep have been found attempting intercourse with wolves even as they are being eaten. The look on their faces is one of wry amusement and mild frustration. It is likely that somewhere deep inside, the sheep's brain is actually screaming.

Sheep are one of the few animal models in which natural variations in sexual preferences have been studied experimentally. Other, similar experimentation has been attempted[3][4][5][6] but only sheep have been found to be willing, even eager subjects of these experiments. Because the sheep seem to enjoy being touched by humans so much, such experiments (even those involving mild teasing or cuckolding) are considered to be much more humane than those involving other animals. 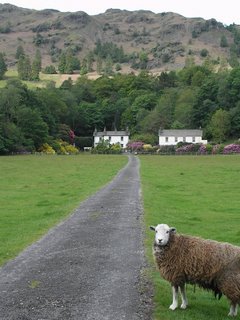 No need to be sheepish, just drive past, and ask her if she needs a lift.

Approximately 8% of rams exhibit sexual preferences for male partners (male-oriented rams) in contrast to most rams, which prefer female partners (female-oriented rams). An additional 2% of rams prefer human partners of either sex. Of those, nearly half (1% of the total) need to be made to feel 'pretty' by a human before being able to achieve orgasm. Because sheep appear to have much simpler communication than humans, even scientists with very poor acting skills are able to pretend to love and dote on these sheep in a laboratory setting. Xavier Johnson, lead researcher in the Sheep Sexuality Project, an ongoing study being performed across an international body of universities, described such sheep specimens as, "very easy to please, but utterly depressed when amongst other sheep. A simple smile or a kind touch on the head will make an anthro-preferential [sheep] content for a whole day. And they rarely spurn our sexual advances. After three months, I could walk naked into one of the anthro populations and have three or four sheep butting heads, all trying to perform fellatio on me at once. God, that was a good year."

A cell group within the cock-shaped medial preoptic area labeled the ovine sexually dimorphic nucleus is significantly larger in adult rams than in ewes. Furthermore, there is a significant difference in the nucleus between male-oriented rams and female-oriented rams (and likewise between female-oriented ewes (which are totally hot) and male-oriented ewes). By prodding the ovine sexually dimorphic nucleus with a glass rod or a relatively clean chopstick or your finger or just whatever is handy, you can permanently alter the sexual orientation of a sheep.