Office Etiquette is a general term for the written and unwritten rules that make an office run smoothly. The following general guidelines were published in the 2014 guide to official office management compiled by the Lichtenstein league of happy office workers and are generally considered the definitive documentation of office etiquette. 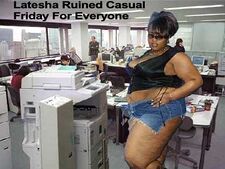 The league of happy office workers lists the following as general rules to consider and adhere to when working in an office. Most items contained within were usually considered common knowledge until the Prestige publishing massacre of 1878 the aftermath of which resulted in the development and publication of these guidelines.

Added to the guide in 2001 the following sections governs etiquette relating to emails and other digitally transmitted text.

How to treat and not treat co workers.

General things to consider about meetings.

Hygiene and cleanliness standards for the office.