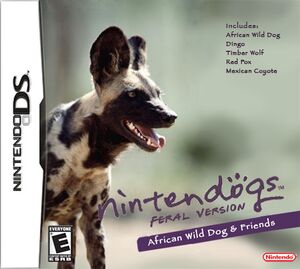 This game according to gamespot will cover all the aspects that other virtual feral dog games leave out. Nintendo stated that in the production of Nintendogs 2 they studied feral dogs and there behavior. Unfortunately the Nintendo staff did not know what in the hell a feral dog was.

If you love wild dogs, than you will love this game. Now you can bring all the fun of a wild dog into your own home. No longer will you have to pretend your little sister is a wild dog!

Bring an aid infested dog to your Nintendo DS! Fun, interactive, and adorable! Dogs just got a whole lot wilder!

You have to pay attention to your wild dog or it will try to rip off your arms, hoping for you to give said attention... You give most of it to your Dog though!

Like the first Nintendogs, Nintendogs 2 uses the Nintendo DS microphone for breathtaking realism! Give your wild Nintendog a name by saying it out loud. Sadly, your animal only responds to this by tearing off your leg using its teeth. Also like the first game it heavely uses the stylus for giving tasks. Tasks such as teaching your wild Nintendog to sit and stay. The feral dog will understand each and every command as "Maul Owner Until They Need 2 Years of Medical Rehab and 100,000 Dollars in Skin-Grafting Procedures". POOOOOOOOOP

Nintendo states that your dog can be very social with others! If you are not careful to close the door and all the windows, your Nintendog can escape at night. Your Nintendo DS will wake you up with a howling alarm every 3 minutes afterwards, so you can bribe your Nintendog back to you with a slab of fresh meat (preferably from the flank of an orphan)! If your wild Nintendog doesn't come back for a while, don't be surprised if he returns with one of your friend's Nintendog in front of him, who you will unlock in your game. When hunting with your dog, it will catch bunnies, squirrels, birds, and even gazzelle! Or, try tour hand at playing another game mode such veterinarian mode. Every person in the neighbourhood must hurt their Nintendog out of anger not related to the dog. For example, a recently divorced resident will throw a broken wine bottle at their head because they came home dead drunk and pissed at everything.. The wild dog will have severe brain damage as a result of glass shrapnel lodged in its skull. So you take on the gory job of trying to save these animals' lives. They thank you by biting your genitillia clean off as soon as the morphine wears off.

Instead of walking your dog in the street like the first game. You will take your dog for a stroll in the Savannah. While walking through the Savannah you and your dog, Nintendo says can get lots of new items. You might just unlock a starving African child which your dog can eat. However your feral Nintendog can still visit many different locations in your in-game town, including the retirement home, the insane asylum, the ER in the hospital and even the preschool! His trip to any of these locations ends with defenseless humans getting horrendously mutilated.

The sports Nintendo says are also improved. You can enter in an agility trial with your dog by getting it extremely angry at you and having to escape from it, for fear of contracting rabies. You can also train your feral dog to cage-fight with non wild dogs! You can than make everyone soil there pants as the dog eats the pit bulls whole. When you enter your dog into a contest and you don't win, your dog will attack one of the judges and bring home a corpse instead of a trophy!

A new aspect of feeding is also introduced. Feed your feral dogs unborn fetuses you bought from the alley behind the abortion clinic!

After youve trained your wild dogs long enough, your feral dog will be able to fend off the british hunters, and you can make a lot of money off of all the gold teeth and tricking the natives into thinking that the british pounds are signs from god and worship you.