Apparently, this guy does not need to compensate for something.

Are you missing something? Are you deficient in a certain important quality? Do you attach far more importance to this that it deserves? Does it make you feel inadequate? Less manly? Less attractive? Less...powerful? Sounds like you need to compensate for something!

There are two ways to go with choosing your compensation car: FAST! or BIG! 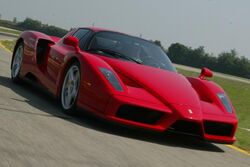 The classic method. Driving an unnecessarily powerful and expensive car has obvious appeal.

This approach has gained popularity in recent years, not only among the many compensators of the world, but among all those who have a need to feel a hollow illusion of power and superiority.

Many compensators make the critical mistake of not getting the most out of their chosen compensation car by practicing proper driving technique. In fact, how you drive the car you have is far more important than the car itself.[1] The key is to drive as if every trip you take, even if it's down the block to 7-11 to stock up on cheap beer, is a race. It's a race against everyone else on the road, even if no one else is on the road. And there are no rules in this race. When people see you speeding, cutting everyone off left and right, and weaving in an out of traffic like you're playing Frogger they will surely think: "Boy is that guy a real man! I bet he has a wang the size of Idaho!" Remember, the more casually you needlessly endanger the lives of others, the more of a man you are.

In the past possessing a collection of Cuban cigars would indicate that as an American you ignored economic sanctions on that country and that you were happy dealing with any type of dictatorship, be they of the Left, Right or Straight Down the Middle. There you could sit behind your desk like Winston Churchill wreathed in dense cigar smoke as you made the deal.

Sadly these days with no smoking habits infecting even the politically incorrect, puffing on a cigar is no longer an option. You could try using a spliff but the legality of doing that depends in which USA state you are in. So probably best not to do as it could land you in jail in the short term.

This can be shown by physically standing legs apart and thrusting your groin forward. Mentally it is show you don't give a fuck. You are what you are. Live with it.