“I wanna become a guitar hero! Not some n00b playing a guitar controller, but a real one.”

Hello, faggots! Do you want to shred on a guitar like no other? Then pay attention to these steps that will take you from a retarded ass playing a fucked up guitar game, to a virtuoso! The next Yngwie Malmsteen that will KILL the original! Now lets get started, shal we?

Here are the four steps that you have to conqur if you want to be, the Guitar Hero. You need to:

Here are some examples

What to be, and What NOT to be[edit] 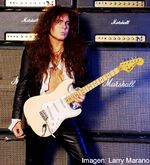 Yngwie Malmsteen. The guy you want to be.

If you want to become a guitar hero, you're going to have to be like Yngwie J. Malmsteen. This Son of a Bitch has all of the techniques n00bies wish they could have, and he also has that pompus IN YOUR FACE atitude whether he's onstage or not. And if you don't like his Douchebag ways, then to cry home to Your Mom! But that doesn't mean that you should play just like Yngwie. What I meant by that, I mean take some of his ideas, and make it your own. Unless you want to be like one of those dumbass Yngwie Clones that copy and steal all of his techniques. There's also some great motherfucking guitarst that you should check out like EVH (Eddie Van Halen), Dimebag Darrell, and Paul Gilbert.

Okay, there're are some guys you want to be, and then there's a guy named Kerry King. A guy, or should I say n00b, NOT to be. Why? Check out some of his solos to see what I mean! What kind of n00bie crams a bunch of 4-notes, whammy bar dive-bombs, along with pick scrapping together and calls it a "solo". He can't even play his dumbass solos live for god sakes! Don't get me wrong, I do think that his solos can be sometimes ausomely insane, but its just not cut out for this article. 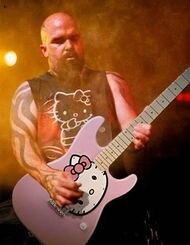 Kerry King. The guy you DON'T want to be.

Well everybody, its almost time for closing, but just remember this. No matter how pathetic your solos are, its never to late to fix them. Now quit being such a n00b and BE A FUCKING GUITAR HERO FOR GOD'S SAKE, DAMN IT!

~ Some n00bie being offended by the article