So you just got out of college and you want to be a journalist, huh? Let me see that degree. This degree here would serve you better if you were to shred it in a shredder, rip it into smaller pieces, feed it to your dog, light the fecal matter containing the remnants of the degree on fire, and then sweeping up the ashes and shooting them into space. Jeez kid, you just don't get it! Do I really have to spell it out for you? Fine.

It is highly likely that people will seem uncomfortable around you or try to avoid you. This is just their way of saying "I really want to answer your dumbfuck questions."

The first step in becoming a journalist is collecting some nice facts to write about. More advanced journalists won't have to do this, but you have to because you aren't at the advance level yet. So you're going to have to go to someplace entirely boring and dig up something to write about. Make sure that these facts are so overwhelmingly boring that you fall asleep at least twice while collecting them.

Example: Go to a race that's raising money to cure diabetes, or a town-hall meeting about the crocodiles loose in the sewers. Talk to everyone and ask annoying questions that seem damn near irrelevant, such as what the alligators' names are. Make sure to get everyone's contact information and call them at least eight times in the next three days. 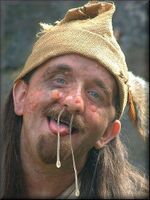 This is exactly the type of picture you want for your article.

Oh, yeah. You should have gotten those WHILE you were at the event, my bad. Well now you'll get a chance to use that contact information you collected to call everyone together for some good photos. The best time to schedule these photo shoots is about 3 in morning. If someone says they don't want to go, then call them every five minutes for the next hour and try to persuade them further; they're probably just trying not to sound to eager. After you have a bunch of really nice photographs and the people are howling obscenities at you, thank them for their time by not saying anything to them, hurrying into your office, and locking the door.

Don't Despair! Although some journalists will tell you this step is unethical, it is only because they are jealous of your abilities.

Now that you have some down-to-Earth facts and lots of pictures to back them up, it's time to do what all great journalists do: make things up. This is where the best journalists who don't even NEED facts anymore will start, and it's a crucial skill to learn. Everyone knows that people don't want to hear straight facts, they want to hear about people's heads exploding and killers and everything that isn't currently happening. So now is your time to be creative.

For example if you collected facts from the town-hall meeting about the crocodiles in the sewers, you might want to report that the crocodiles burst out of the sewers and ate three of the attendees. You should make the headline something that skews the story even further, like changing Town-hall Meeting Discusses Crocodile Problem to Crocodiles Attack During Town-hall Meeting, 3 Dead. Trust me, people these days know that all news is made up and exaggerated for ratings, they'd never be stupid enough to believe every warped and untrue story that they see or hear. 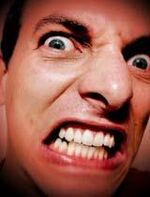 Your editor launching into a psychopathic rage upon reading your article.

So now that you've got your attention-catching, breath-taking article you think you're ready to submit it to your editor, don't you? Well let me tell you something about editors, they absolutely hate journalists and will attempt to kill you with a copy of your story if they ever see you. What does this mean? You can't just go waltzing into the editor's office and hand him your article because the only thing editors hate more than journalists is waltzing. You could try to tango your way in, but they might still pick up on the fact that you are a journalist and attempt to eviscerate you with a paper weight.

Here's what you gotta do. First, wait until your editor leaves his office to use the bathroom, get coffee, or any other reason. Now sneak in and put a copy of your article on their chair, and another on their desk. Also leave a note explaining that you are going on vacation for the next 2 weeks and that there will be no possible way for him to contact you during this time. Now flee the country or find another place where no one can find you and keep yourself from being recognized, your editor will attempt to destroy you for writing an article as soon as he learns you have done so. It is suggested you begin to work on your next article while in hiding.

Now that you've waited two weeks in a crummy, desolate motel room in some middle-of-nowhere place, you should very carefully make your way back to your editor's office. Approach the door slowly and be ready to dodge any projectiles. If your editor doesn't launch into a raging frenzy, he'll give you back an article marked up with red pen showing all the mistakes you made. Thank him and walk away quickly.

All the mistakes he marked are easily fixed, as they all stem from the fact that you are a journalist. Leave them as they are, and he'll probably grudgingly accept them, while staring at you as if doing so intensely would make your head explode. The real purpose of your second draft is to further expand the story by doing something similar to what you did in step 3. Make up some more stretched truths such as changing Crocodiles Attack During Town-hall Meeting, 3 Dead. to Crocodiles Rise from Sewers and Become Rulers of New York. 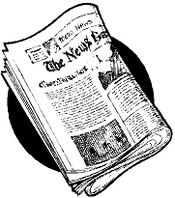 Outdated and obsolete, the newspaper is rarely seen anymore besides in small failing shops, and old people's houses.

Now that you have a paper that resembles a story your dementia-ridden grandfather told you when you were two, see what mood your editor is in. If he recently began taking large amounts of anti-depressants after reading your first submission, then you may be able to slip it into his office and escape with your life. If he started doing crack or drinking because of your last submission or just seems to be as irritable as before, then basically follow step 4 again and hope for the best.

After your article finally gets published, you can rejoice in knowing you will receive a paycheck large enough to buy you a can of soda and a side of beans. Go out into the streets and listen to what people have to say about your article. Most likely, they won't be saying anything about it because nobody reads newspapers or magazines anymore. However, if someone is talking about it you should immediately walk up to them tell them they are misquoting you and twisting your words around. Threaten to sue and receive a large out-of-court-settlement. See? Wasn't that all worth it?