HowTo:Alienate people based on their skin colour or religion

“ Aaa-Aaa-Aaastro turf! And you know who we have to blame for that? The Jews!”

~ random, based on two classic moments in movie and TV history

Son, you've been growing quite tall lately, and you're growing more of a man every day. So I figure I'm gonna teach something your ancestors have been doing for centuries: alienating people based on their religious views. Your great-great-grand father Cornelius Ass-Face Rogerson was the first man to insult Muslims, Jews, Asians, and Blacks at the same time.

The Three Rules of Alienation[edit]

There are three rules you must remember when alienating people. These rules have been written, edited, and vandalized vigorously, kind of like a Wikipedia article. But do not judge the wisdom of these rules- they have been through 8 generations of Rogersons.

You are always right.

This is by far the most important rule, and applies to everything else this family does. Whenever you get into an argument that could prove you wrong or actually "enhance" your understanding of a subject, just remember Rule 1 (not 34), and you will "win" the argument and everyone will either walk away angry or the weak-minded will join you. If anyone disagrees still, then resort to violence. Remember, son, if violence isn't solving a problem, you're not using enough. This tactic has been practiced by many people, such as George Dubya Bush and that guy that starts with H and ends in ler. I am, of course, talking about Hellen Keller

They are always wrong.

Like rule 1, but different. Enforce this rule by exercising repeated verbal clubs to the head of your alienees.

This is important when you arguing/interacting/in the same room as/working for a person with different religious views.

Now that we've covered the basics, son, you now must learn the many methods of the sacred art of AntiSemiti-Fu. There are many ways you can alienate someone, but certain ways works better on different people, so pay attention, damn it! 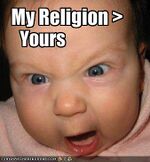 Your baby brother Angus asserting himself. If only you could be more like him...

This one is the staple of the AntiSemitoaist's arsenal. This is by far the most obvious and powerful ways to discriminate. It can vary in strength, depending on what you leave said person out of. This one is also one of the easiest ones to utilize in real life. If your friend, that Jerry-Cohen-Goldfinger guy asks you over for dinner, simply respond "my doctor put me on an all bacon diet." That will piss him off.

Calling Someone A Name[edit]

Another classic, this one is by far the easiest one to use. Simply use that big mouth of yours, son, and spew out as many tainted concoctions that you can think of. This is usually quite easily, as anyone with god damn ears can hear you call your friend Barack-Mohammed-Ackmed-whathisface a terrorist and a disgrace to the euh ess of aeh. Just remember kid, if you ever become famous, DO NOT get caught doing this, its fucked up a lot of celebrities' careers, like the Dog's.

This is a very risky tool, as getting caught can lead to years in jail. Son, I don't advise using this one, as the last Rogerson to use it was Jack-Dick-Ass (Yes, that is one word)Rogerson, and he was sent to jail for over 20 years. He got sentenced to more after committing acts of a different sin with his "weapon" in the showers, but you'll have to wait a little more to hear about that. Some very effective tactics are tagging the persons house, car or body, wiring their plumbing to a giant tank of acid and unleashing a very angry and sex deprived Micheal Jackson upon them and/or their children. 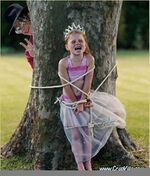 Start a World-Wide Genocide Against All That You Hate[edit]

Son, I have to be honest, I don't know much about this one, from sheer lack of experience. The Rogersons haven't tried this one yet, and maybe you can be the first. Hitler did it and so can you! Do you want to be succesfull like him!? Then buy my book How to Kill Jews: The Nazi Way by Not Adolf Hitler only available in over-the-counter prescriptions

Invite them to a Bacon Party on Christmas Eve (or any such similar act depending on who they are.)[edit]

Ah, this one brings back good memories. I remember doing this to all my inferior friends, and I had much, how do you kids say it, lulz, I guess. I personally suggest this one, as it is easy to get away with. It can easily be passed off as an accident. Simply offer a Muslim or Jew some bacon, a Mormon a smoke or a christian a cheap Vietnamese hooker. If they accept, make sure to catch the act on video so that you can use it to blackmail them into committing sacrilegious or racist acts against their own kind.

OK, so you got your tools, and you know the rules. Now, you must learn the final step, doing the god damn thing.

Example 1: Excluding. You: And you're all invited, except that stupid-ass nigger over there. Black Kid: What the fuck did you just say? You: I can't understand you rapping over the sounds of the starving children in Africa! Black Kid: WHAT?

Example 2: Bragging. You: So I was drinking, smoking, and having sex with my one wife last night... Some Mormon Guy: Fuck you.

and Example 3: Scapegoating. You: Whoever broke into my garage to steal my bike last week HAS to be you. The suspect composite drawing IS you. Don't act like this is racial profiling against esp. YOU!

Mexican/Puerto Rican/Hispanic/Latino/whatever they are called now: I do know we didn't cross the border, the border crossed us, and you better not cross in my yard again, asi. I'm in a street gang the MS13, we are armed & dangerous against your kind, gringo. Now I'm off to my job I stole from you guys, or was it you didn't want to work in that job. Adios.

Now you know all the tricks of the trade, son. You grow up so fast. No remember no matter how much better you are then anyone else who is different, just remember, the more you hate someone, the better you are than them.