HowTo:Ace a History Exam without Studying 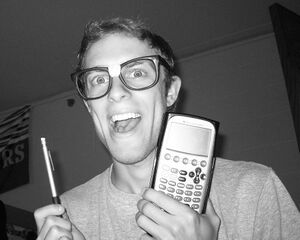 No, silly. You will not need to use a calculator. This is a history exam!

“Exams were made to be failed.”

~ You on why you failed the past 8 exams

You enter the auditorium, which is seemingly infinite. You sit down. On the desk in front of you, you see a pen, four sheets of lined paper and a blank paper. Fascinated by the unknown, your mind beings to swirl around the blank paper just like a maelstrom. The blank paper, perhaps, is resting on its front, like hot chicks on a sunny day at the beach. Tempted by the forbidden fruit, you try to read the vaguely printed letters by looking at the backside. The invigilator catches your eye. The pace of your heart beat speeds up. Cold sweat. Sentiments of guilt. Your gaze flickers down onto the pen. As you realize that the ink level is too low to write a 10-page history essay, the invigilator signals that the exam has commenced.

Rustle of paper. The backside has turned. Quickly. Rapidly. Swiftly. Skimming through the assigned questions, you realize that nothing of what you have reviewed for is included on that endless list of questions. Everything seems hopeless. Until you see that question on Josef Stalin...

You have all heard the saying that it is better to be honest? Well. Do be honest. Examiners appreciate honesty. They really do. So, what you would do is to commence your essay by truthfully explaining that you have not reviewed for the exams but you are more than willing to answer the question as a means of satisfying the examiner.

Here is an example of what a pupil has written:

I feel that it is of utmost necessity to confess that I have not reviewed shit for the exams, as I consequently have been far too high. But do not fear, sir. I will do my best at answering this question in the form of prose, followed by a brief analysis and a concluding statement. Here we go.

The pupil explicitly states that he has gone through some difficult times but is happy to answer the question. Being the creative type, the pupil is willing to write the essay in prose (that's poetry for those of you who don't know). By saying 'Here we go' he signals that he is about to start the prose.

This is where the fun begins. Step two will show you how you can improvise an answer for your essay - even if you have no idea what the question is about. (There is no need to read it either. It is all there. In front of you. Actually, it would be a good idea if you dared to look at the question). If we return to the given scenario, the pupil is given a list of history essay titles, and he finally decides on Stalin. Consequently, the pupil will write about Stalin. Now, let's take a look at the essay question.

Brilliant. Now we know what the question is. And if you have been clever and read the article on Josef Stalin, this will be a dance on roses - just watch out for the thorns. (They can be nasty. It hurts like hell when you have to pull out the thorns from your feet). We can also assume that the pupil has read the featured article on writing poetry - and the examiner has not.

Continuing the pupil's attempt of answering the essay:

'As I played outside in my yard
My puppy stood carefully at guard
He looked at me as if to say
'Oh my, what a grand day!'

That's when I looked down at my shoe
and noticed a pile of puppy poo
And since the day was quite sunny
that puppy poo turned quite runny...

My puppy continued to make quite a mess
as the piles grew in excess
My parents will soon be back
and I hope all I get is a smack...'

The pupil has written the poem. Stage 3 will proceed by showing you how to make the brief analysis that the pupil stated in stage 1.

So, we have now read the poem. Before we can analyze it, we need to ask ourselves basic questions. What is the poem about? How is the poem's content relevant to Stalin's brutality? What was the weather forecast? Let's look at what the pupil wrote.

'The poem is about the time when Stalin had a little puppy. Looking at the poem, it may be determined that this moment came from Stalin's childhood, given that the tone and voice sound quite young. Simple words are used; and the naivity of the speaker is further emphasized by the AABB, CCDD and EEFF-rhyming scheme, The rhyming scheme is very simple. Children like simplicity. Children also like puppies.

It was a warm and sunny summer's day. This is of course natural because Stalin is Georgian. It is quite warm and sunny during the summers in Georgia. Georgia is located in the Caucasus. It is always warm in the Caucasus because it is between the Black Sea and the Caspian Sea. And it is located south of Russia. Little Stalin was playing in the yard with his puppy because it was too warm to stay inside - and everyone enjoys some sunshine.

Puppies, alike human beings, need to excrete their biological wastes. Puppies, unlike human beings, do not use toilets so what they do is that they openly excrete outside - in public. It may be determined that Stalin's puppy was quite young because he has not been trained to excrete in a more subtle manner. Dogs may be trained to do this. Some dogs can even use toilets!

Since Stalin's puppy could not control himself, he excreted all over the garden and on Stalin's new shoes. The warm weather made the unbearable even more unbearable. Evidently, Stalin became stressed because his parents were coming home from work. It was a sunny summer's day and on sunny summer's days, people are allowed to leave work a bit earlier in Georgia, which is pretty sweet if you ask me. After having read many biographical works and watched countless documentaries of great historical value, it has come to our knowledge that Stalin experienced domestic violence. His father was a drunken shoemaker who would sometimes beat little Stalin. No wonder Stalin had so many bruises on his arms, always had to lie that he fell off the stairs, and consequently, he was bullied by the other boys at Gori Priest High because of this.'

The pupil attempts to take a literary analytical approach in answering the question, after having written the poem on Stalin and his little puppy. I personally think that the pupil did a good job at this, being unprepared and quite high at the time of writing, don't you think? I am intrigued over what he has written in his concluding statement. Perhaps we shall take a look at this? Oh lets!

'Given that Little Stalin was always bullied by the other boys at school and he was beaten by his father, Stalin's mind became a bit messed up. According to Dr. Sigmund Freud's Freudian psychology, Stalin would not be aware of any other ways of behaving as a male adult, so he would acquire similar behavioral characteristics from his father. This is evident in how Stalin conducted Soviet Russia and how he treated the people around him. At some point in the 1930s, he launched the Purges, a social program where he would send people to Gulag camps in Siberia. These were summer camps. Stalin's twisted mind also led to the consequence of his wife committing suicide, and consequently, he now has a profile on Match.Com. (Honestly, check out his pictures. They're really cool!). To conclude, Stalin became a brutal man, conducting brutal policies in brutal times in a brutal country.'

So, I really do hope that this HowTo article on how to ace a history exam without studying has helped you in not studying for the exams.
Go out there and do not study!