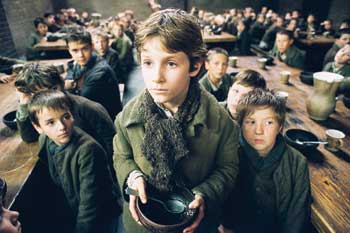 "Wut's gott'n inta ya youngsters? Why? Wut's your purpose in getting more gruel? Do ya think it will make ya less hungry? Do ya think getting more gruel will mean less for me? I don' eat gruel, I eat people food! I can' give ya any more gruel! Tis' impossible! I won' do it! I CAN' DO IT! Gruel is fo' well behaved orphans, not Oliver! Haven' ya read the book?"

Oliver's stomach growled even more loudly than usual, as he thought only thoughts of gruel: tons of gruel just pouring over him and his tiny, deflated stomach. He licked his lips in anticipation, surely were he able to muster but one more enquire his urges might become satisfied.