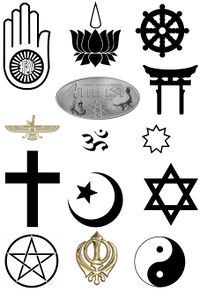 Some of the most popular symbols of fallacy.

Different cultures take different stances towards fallacies: some abhor them, some are indifferent, and some are actually based on them (see modern-day USA).

In Ancient Greece, they were considered social faux-pas, and the perpetrators, besides not being invited to parties, earned all sorts of nicknames, from "doody-head" to "sophist." (Which is the origin of the term "sophisticated" — someone who, through logical fallacies, got fooled into thinking that paying US$5,000 for a US$50 piece of clothing is something to brag about.)

Twenty-first century Brazil is a good example of indifference to fallacies. The average Brazilian, when considering an argument, is primarily interested in whether the conclusion agrees with what he or she already thinks. If it doesn't, they reject it immediately, unless it shows some promise of getting them on TV. Brazilians, though warm and hospitable, are angered when confronted about this, usually saying "that's not what I think at all."

Most philosophers reject the fallacies that they can spot.

Nevertheless, one philosophical school, founded in the early twentieth century mainly by dumb people, protested that there is circularity in using logic to ascertain what is a correct argument, and at the same time using correct arguments as the basis for logic. They thus maintained that logic itself is a fallacy. However, as Gödel argued, the notion of fallacy depends on logic, and therefore not only is the concept of fallacy fallacious, but the entire preceding discussion as well. He concludes that, since the discussion had proved itself fallacious, and was fallacious, then it must be true, and so people may carry on as before.

The aftermath of this dispute involved much head-scratching, and dozens of philosophers voluntarily joining the ranks of dumb people. Since then most humanities majors have consistently avoided logic and its vicinities.

The two most popular personifications of fallacy.

One of the most widespread fallacies has the formal name of modus ponens. From two premises, of the form

, it attempts to deduce

An important open problem in logic is to find out what exactly people mean when they say "the letter B". Leading logicians such as Dwight D. Eisenhower hope to solve it by building on previous results on "the letter A", which is now considered to be well understood.

Other common fallacies include:

"Critics allege that certain parts of the USA's foreign policy have been questionable. Since America would never put the lives of foreigners at risk (this is the use of the fallacy of sensitivity), this cannot be true."