Ahh, the Congo Rat. Aside from the platypus, many would consider this animal to be a combination of all those extra parts. It's ugly, but so many people love it! Why is that? It's spoken of everywhere. "Hey, I have 1000 posts!" "CONGO RATS!" "omgyay! <munch>"

See what I mean? Come, dull-witted reader, and delve into what many have considered the TRUE MYSTERY OF LIFE! What IS the Congo Rat, and what the hell is so special about them???

Contrary to what one might expect Congo Rats don't live in Congo. The Congo Rat is a native rodent to the Flashplayer Forums. It has a short life-span and is usually very dim-witted, much like the actual people on the forums. It's very dangerous for such a stupid animal. The hairless tail bares sharp spines through which poison flows. The Forumers take much caution when handling them, but every-so-often, some cocky n00b decides to goof off. Everyone points and laughs at said n00b.

Congo rats live in trees, high above the eyes of the animals that prey on it. They are, however, vulnerable to the ants that live in the branches. This is because their tails are hairless, and provide no protection whatsoever. The main food of choice of the Congo Rat is the trash that people throw out. This usually consists of banana peels and the occasional used tissue, but when have rats ever been known to eat pleasant foods? Never. They've also been known to resort to cannibalism..

Congo Rats are bright orange with green spots, purple eyes, and long, black horns. Their teeth are butter yellow from birth. They really are ugly looking creatures. Who would take such an interest in these animals? Forumers. They are sacred, and often given to eachother as gifts fo accomplishments such as #K and bithdays. They are dead, of course, and the person receiving usually gets a terrible case of stomach flu after consuming his or her Congo Rat. As was said before, the Congo Rat protects itself with sharp poison spines. These are hidden within the tail, and pop out when the rat is threatened. The rat does not reveal the spines until picked up, so the rat as a better chance of poking it's captor. 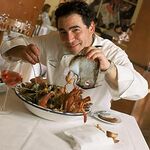 Preparation of a good Congo Rat takes time, so this chef prepared a regular rat ahead of time. It's like Fugu, in some cases.

AVOID THOSE SPINES AT ALL COSTS! If you are poked, you may as well consider yourself 'pwnt.'

You can avoid the by by looking out for these warning signs! When threatened, a congo rat will first make a loud, high-pitched squeak. Secondly, with will stomp it's feet, and third, it will count to three. It does this slowly because they get confused easily. Congo Rats don't like wasting their poison on idiots and lesser morons.

The rodents make great pets. They don't live very long, so you don't have to feed them as much. Getting them de-spined will also make your owning experience more enjoyable. It also makes the rat much more firnedly, now that it has nothing with which to protect itself. They can also be stewed into a foul-tasting but very nutritious soup, most of which is thrown away before even being consumed. (Yes, it's THAT BAD!)

All in all, the Congo Rat, however stupid, is an almost vital part of our ecosystem, even though no one would care if it DID go extinct.

The king of the Congo Rats is known as The Almighty King Congo. He originated in an MSN chat as a result of an experiment gone terribly wrong. The King, his soul corrupted, enslaved the many Congo Rats of the Flashplayer Forums and turned them into his army of mindless minions, as was prophecised by the Rat's themselves nearly 4000 years ago! The King himself looks similar to an ordinary Congo Rat, minus the fact that his colors are inverted and considered divine. He's green with orange spots, and his horns are purple! His tail spines, rather than the normal blue, are a brilliant shining silver.

The War of the Rats[edit]

The King was intent of taking over the world. Using his new army, he took over the Flashplayer Forums and took into his army the Forumers known as KILLER-WEREWOLF and Surreal. They are currently his generals. He bounced quickly from country to country, trying to find his ideal hiding spot so that he could sit back and have his generals do the work. KW and Surreal happily did as they were told, eager to please their Almighty King. The world fell to their awesome power.

After they conquered Africa, King Congo acquired a new general. Known as Soulmech by the other Forumers, he was nicknamed Ahndie by KW, simply because she thought it sounded 'cute.' He prefers to be called "Soulmech the Sexy General," but neither KW nor Surreal ever call him that. This makes him sad.

Update I: At this very moment, he has taken Australia as his home base and is slowly adding states to it. The most recent, however, is Communist Russia.

Update II: They took Newgrounds.. FLASHPLAYER IS NEXT!

“Wow! These are even better than the bite-sized ones!”

The Congratians are the non-rat folk of the Congo Empire. These people have been adopted into Congo Rat society, living the life of a Hindu Untouchable among their masters. They pick up trash, clean out houses, and even carry off the dead rats that accidentally fell from the trees. The rest are left there. Although KW and Surreal are not Congo Rats themselves, they are not considered Congratians due to superior intelligence and the fact that they gained the favor of King Congo.

The Congratians are often looked down upon and laughed at. They are mostly captured Countrymen that got in the way of their hostile takeover. They are forced to walk around almost completely naked and painted gray, just to give them the feel of being worthless among their more colorful neighbors. They are used in human sacrifice to appease the god Congratikus, so that he may smite their enemies and promote good health and long lives.(Because, by-golly, they need it.)

War of the Rats II[edit]

The rats have been in civil wars throughout the centuries. They are usually between clans of rats, from the Congo's to the Kong Rats, each bearing their own markings and colors. This is to prevent any spying and foul play, although one clan was defeated by the Congo's because they were too stupid to realize that the bright orange animal did NOT belong in their society of black rodents. There are many different clans about the Island of Flashplayer, but Congo is by far the most dominant of them. They include the Kong Rats, the Congo, Ckongra and the clan of Kungratikos. This is only a handful of the known clans, for many of them has been wiped out over the ages.

Clan Congo is the most dominant clan, inhabiting most parts of the Flashplayer Isle. They live in small tree houses high in the air, and, due to their dull-wittedness, often fall from them. These rats are considered disgraceful and then are carried away by their untouchable slaves. This condemns their soul to an eternity of picking up horse feces in Congratikus' heavenly stables, and these stables are FAR from the paradise described in the holy book of Congo, called the Congratikoran.

The Kong Rats ae a branch of the Congo rats. These rodents are desendents of the exiled followers of the traitorous rat general Kong-Kong, whom betrayed the first emperor of Ratdom. His followers made their home around Lake Ratigan, and made a living by dipping their tails into the waters and fishing for guppies. This was also a popular method of suicide, because a section of the water was infested by Pirahnas.

The Ckongra are the barbarians of Ratdom. Led by the cunning Mathruk Ckongra, the Ckongra originally held the dominance award among the rat clans. They were eventually taken down as Mathruk was assassinated when he became power-hungry and was dubbed a lunatic. Not much can be said about this clan, except that they will eat anything. This includes footballs. PLEASE don't play football in Ckongra territory. You'll never get your ball back if you do. They are cannibals. They will eat themselves and eachother.

Kungratikos is the secondary rat-god. Congratikus is considered, by many, to be too good and nice. From these feelings spawned the demon-dog Kungratikos, and the clan that dedicated themselves to him. The Kungratikos rats are evil by nature, and like to take candy away from babies. This has earned them many bounties and an awful reputation of being smelly. A popular form of torture for the Kungratikos is a nice hot sponge bath, but most other clans do not consider this bad at all. Like ALL Congo Rats, the Kungratikos rats are too stupid to realize this. They never get the information that they need, and often force their victims to eat sugar in a second futile attempt at torture.

The Cult of the Congo Rat[edit]

Seeing as the Congo Rat is so popular nowadays, people have actually created a cult dedicated to them! This Clan is extremely populated, with it's main building housing over 50,000 people! The ranks range from the low Untouchable to the high-ranking Brahmin-class of Congo-Ratman. They practice sacrificial rituals and even bonfires. They also sponsor middle school dances to raise money for the local blood drive. They're also trying to get new uniforms. They have sucky uniforms right now.

The leader of the cult is Agent Smith#1. That's right, the first Smith ever. What an honor! He gives us orders to spread the word of the Congo Rat and read the holy book of Congo like it was the Holy Book of Everything.

Congo Rat Cultists worship the same god that the rats themselves worship, the mighty Congratikus. They also keep in very close contact with their ratty counterparts through trade and dancing contests.

The rules of the cult are as follows:

Thou shalt not eat eachother (Unless thou art of Ckongra descent)

Thou shalt not swear (Unless thou art ranting)

Thou shalt keep thy clothes on at all times (Unless it's really, really hot outside)

There is no Christmas! There is Congratikusmas!

The usual punishments of the Cult include a horrible spaning and an atomic weadgie, although in extremely RARE cases, the dreaded Rear Admiral has been used coupled with Wet Willies and the pushing of the violator out of a third-story window.