The Canadian Revolution, or as Canadians call it the "Great Hockey Stick Rebellion" started on September 25, 1995. The leader of the rebellion, El Presidente Red Green wanted to liberate his country from the grasp of the NHL Lockout and the Metric System which were in his opinon, turning his country into a cultural void where Anne Murray and Michael J. Fox would be worshipped as the patron god and goddess. 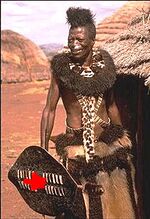 A coked up Canadian soldier right before the surprise attack on Ottawa.

After learning? of Gretzky's fate, the United States declared war on Emperor Stanley and his cup of souls on March 15th 1999, which was possible because the UN had listed the Gordie Howe Hattrick as a warcrime, enabling the US to intervene on Red Green's behalf. While touring "the hood" in Detroit were litle crips and bloods cap eachother boom, Red Green had discovered a wonder weapon that had been developed by the CIA as a low-cost user friendly tool. What Green had discoverered was coke, or more precisely crack which was the improved and cheaper version of coke. Since none of his fellow Canadians knew how to harness crack's awesome power, Green asked for the slingers and pushers to join the Labatts as mercenaries and lead a raid on the Imperial Castle which was at a Tim Horton's outside of Ottawa.

On Decemeber 2nd, 1999, after nine months of training under Baron Luciene Bouchard, the Canadians were fully acclimatized, and strung out. Using crack, along with their normal weapon (the hockey stick) gave them an advantage over all the kings's men. This training enabled a night drop over 200 miles behind enemy lines right on to Ottawa and the Tim Horton's itself. Government troops were taken by surprise and surrendered to the now famous "crackheads," enabling Red Green to play Lord Shitshisself in a cage match for the fate of Canada. The match was over in less than an hour when Red Green smashed a bottle of Canadian Club Whiskey on Stanley's face. To make matters worse, Stanley had wrapped himself in barbed wire to increase his "badass" factor in front of the crowd that had gathered to watch.

Although mister chief guy deosnt know how to harness crak he decided to smoke it all and he realised its awsome power it made him invonerable to pain while he stumbled around getting stabbed by his coke dealer he tryed to cut the other chief guy and he died and got creamated the end bitch.