Adopted by all nations on Earth but the US, the metric system fills the dual role of measuring things and confounding Americans.

Plus, it's just one more way to be not-American. Rather than having to remember how many inches are in a mile, how many Polski Ogorki pickles can fit into a VW Beetle, or any of the other obscure conversions necessary for imperial measurement (ironically also referred to as standard measurement), users of metric (or Metriconians) are smug in the knowledge that conversion in metric is a simple as shifting a decimal place.

The metric system was devised by a committee of expert horticulturalists of the Canadian Department of Ornithology, Neuroses and Taxidermy of Canada. These brave pioneers are, at metric comic book conventions (Metrocomicons[1]) the world over, referred to in reverant, hushed tones as the measurati. 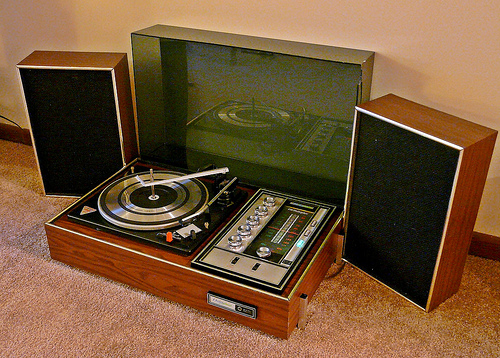 Since the early 1970's students in Canada's largest province have "funded" their post secondary education through the use of this government programme. A combination of loans and grants are received by the students. Being disbursed in late September and early February electronic stores, Ikea and pubs are the primary beneficiaries of this programme. The former two tend to benefit from the September payout while the pubs see a small percentage of September's allocation and the lion's share of February's.

The advent of the Ipod and other digital music devices has caused a shift in the way the students are spending the funds on electronics. Turntables, amps, speakers, tape decks and speakers were once in vogue. Square plastic cases used by dairies to deliver cartons of milk were stolen borrowed to hold LPs. So many disappeared from August through October that milk had to be rationed during those months because the dairies could not make their deliveries to the few stores in urban areas or Hudson's Bay Company outposts in the rest of Canada.

Baby boomers have attempted to shut down access to this much needed programme as they are now paying for it. If they are not receiving something for nothing, they are not happy. This violates their primary goal in life - Gimme gimme gimme gimme! After most of them declared bankruptcy and never repaid their stereo loans, they made it illegal for anyone else to do so. Thankfully, they are starting to turn 60 and might have accidents with their wheelchairs falling down stairs... I digress.

The socialistic nature of Canada allows for this type of programme to thrive. It is very similar to the New Homes and Cars Programme for Refugee Claimants ($$$$$$$), the Drugs for Guns Programme (D4GP), Here's Money Since You Whine and Complain that You Can't Speak English programme, and the Kash for Everyone Else Programme (KEEP).

The Basics - Length, Weight and Volume

Instead of the imperial system's measure of one foot being equal to the length of the king's foot, the metric system has one metre (100 cm) being the length of one hundred Jolly Ranchers laid edge to edge (1 Jolly Rancher = 1 cm).

Canadians have completely adopted the new metric system. Under the new metric system, distances travelled by car are measured in minutes or hours, not in kilometres or miles. Therefore, distance is inversely proportional to the speed of travel. A mathematical formula to convert hours to miles will be developed as part of the "farness" category of the Advanced Metric System (below.)

Note: some consider the 24hr clock to be metric already - 10 hours daylight, 10 hours night, 2 hours for sun to rise and 2 for it to set.

Two competing committees, one representing all provinces west of Ontario, the other all provinces east of Saskatchewan, have been formed to create the advanced metric system. This new system will contain measurement redundancies called: tallness, wideness, heavyness and farness.

When complete the new system will cost $1.8 billion Canadian dollars to implement and, with the possible exception of spending a stupidly large amount of tax dollars to solve problems that don't exist, will accomplish absolutely nothing. In this regard it will be much like the USA's missile defence system, but safer.