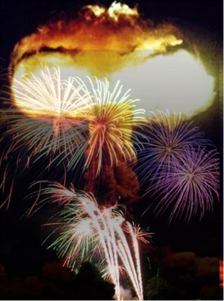 Bonfire night is a celebration held on November 5, commemorating the day that Guy Fawkes invented fireworks. 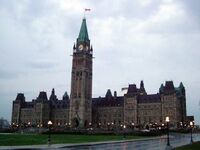 Parliament on the 4th of November, just standing there.

Bein' 1113 years old, I remembers clearly me dear old mate Guy Fawkes and the fifth of November, which is when 'e took the fall for Guyaif Fawirhi the Islamic fundamentalist suicide bomber from Dudley. On account of the Earl of Norfolk havin' tried to open up the local Norfolk gene pool by shacking up with a Muslim bird from Swansea. Aye.

During this ancient time gone by, England was not just a green and pleasant land, it was a land where everyone, 'cept me and the missus, was 'appy. The roads were paved with gold, the trees gave all types of fruits all the year round, the sun shone always and upon everyone, 'cept me, and we all wore pastel coloured togas and combed our silky blonde hair.

Dudley, a hotbed for fundamentalism[edit]

Now Guyaif, me lad, was a bitter and twisted young man, mostly because Dudley, for animal rights reasons, had been declared a separate country from England. Most Dudleans therefore had been forced to develop their own crazy regional accent (still apparent today amongst the sheep keepers) and sleep with their sisters, making it a criminal offence for a Dudlean to visit England under pain of the true death.

Guyaif was not happy. He resented the English togas, the fruit, the sun and most of all the happiness (the roads paved with gold didn’t bother him too much). So after years of pointless whining and handing out pamphlets in the town center while standing alongside that decades fool, he fashioned his own pastel toga from some cats bladders, bleached his hair, and strapped three tonnes of dynamite to his waist. He then 'ead off for the Holy city of London. 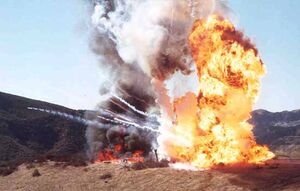 Parliment as seen by a passerby that day, just biding 's time, out for a stroll, he.

Once in Londontown he got himself lost. 'is intention 'ad been to find a nice quiet park somewhere, dump the dynamite and then set it off from a safe distance. Then streak round the park naked, screaming it was the will of Asda or one of the other foreign gods he had gotten cosy with. But lo and behold, he got messed up by an extremely large group of French exchange students, who led him on a sight seein' trip of London and eventually into the 'ouses of Parliament.

Now Plod (the police) was none too 'appy about the three tons of dynamite in the 'ouses of Parliament, as it obscured their way of thinking.

So, they arrested Guyaif and took him to the Tower of London, which he appreciated, because the French exchange students had mysteriously missed it from the tour, then they (the Police) bunged 'im in jail, where he shared a cell with a guy called Roger, who was down for making a sexual advances on a member a hunting party. One of the 'orses if I remember rightly.

Turns out that this bird the Earl of Norfolk has been seein', was a distant relative to Guyaif, The Earl of Norfolk had gotten wind of this and decided to keep 'is bird 'appy and dump me old mate Guy Fawkes in trouble. Aye, Guy! So Guy was arrested on a trumped up charge of wanting to blow up Parliment, of all places, and was blamed because 'e was Catholic and had seen the dynamite. But really he was an 'onest Pirate (and a damned good one too.) Meanwhile, Guyaif was let off free. But, for what ever reason, he refused to leave 'is cell.

Meanwhile, Plod 'ad been carryin' the dynamite back outside, desperate as 'e was to get back at the world, but during his work shifting the dynamite 'e stopped for a minute to 'ave a smoke but misplayed his hand and that is when the dynamite went off and why we have fireworks tonight.

And that, me ol' sea dogs, is what really 'appened. So remember, remember, the fifth of November, aye, for 'our fireworks show depended on it.