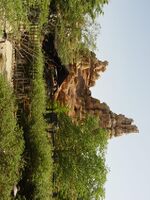 “Aw, Gee who cares about them. I hear tell that the Matterhorn is better. Come on gang let's go kill the Abominable Snowman.”

~ Mickey Mouse on the Matterhorn being better than Big Thunder Mountain.

Big Thunder Mountain is a high summit located within the Frontierland nation of the Disneyland Confederation. The native Frontayuga people of Frontierland call Big Thunder Mountain Diledó-Pelé and regard the mountain as sacred. According to Frontayuga myth, one day long ago, the sea goddess Diledó had been abandoned by her lover, the sun god Firocomídmé. Lonely and distraught, Diledó gathered rocks from the sea and piled them high upon the land. She sat than sat on the pile and stimulated her nether regions by bouncing up and down. In the ensuing throes of Diledó’s self-stimulated passion, the whole earth shook. The violent shaking formed the mountains of southern California. The pile of rocks that Diledó had made as a sexual aid became Big Thunder Mountain. Most visitors to Disneyland are not told of this myth.

The Old Mine Trains[edit]

However some visitors to the mountain stumble upon the old ore loading station. They ride the trains over and over until their faces melt off and they die in the heat of the desert. Some common causes of death are Being eaten by Dinosaurs, Trains crashing on sharp turns, Cannonfire, Rockslides , Cave-ins and Gunfire. Often times stampedes occur across the tracks and into the engines. After that they die. Sometimes people jump off the trains due to sheer boredom and lack of scenery.

Cumulus B. Isobar is the Rain Maker in these parts of the federation. He came here maybe ten years ago in a thunderstorm. Now he and his mule attempt to pan instead of creating rain. I believe that you should avoid him and the crazy in the bathtub. Now you just leave him alone and ignore the trains slow speed. It really feels fast, Kind of like Space Mountain!!!! Yippee let's go ride it again.