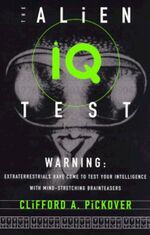 In Earth's never ending need to find new homes for our reject citizens and minerals and resources to fund our modest standards of consumption, Earth's smartest humans (the children of Korean and Chinese scientists) designed a simple test to measure the intelegence of Aliens. The test is considered comprehensive, fair and infallible.

Once an Alien planet is discovered, a friendly scout ship will send two radioactive warheads to take out a couple small cities. Based on how they react, the scouts will decide whether to submit the citizens to an intelligence test or not. If the aliens retaliate, they are considered an aggressive race and the planet is cleaned of the species to ensure the peace and safety of the galaxy.

If the Aliens do not react in any way, they are considered religious pacifists and are relocated to a far away planet along with their god or whatever it is. Pacifists make for mediochre guest workers.

In those cases where aliens react with terror but are unable or too scared to fight back, the aliens are given an intelligence test. Races that do not pass the test become guest workers and will most likely remain on their planet provided with shelter, food and 18 hours of work per day (adjusted to planets revolution).

The test is administered in the populations local language. If more than one language is spoken the judge flips a coin or draws lots or something and picks one of them. Illeteracy in any planets language is no excuse. Aliens that lack hands to complete the written portion are placed in cages and laughed at by the test's administrators, because honestly, who doesn't have hands?

Aliens are asked to cross a busy hi-way or something of the like. If the Alien accepts the task then they fail due to their sheer stupidity. Those who hesitate are then prodded onto the hiway. Any alien that gets injured fails the test. Any Alien that makes it to the other side without injury passes the first sted. An alien that car-jacks another Alien's car and drives it to the next junction, turns back around and parks on the other side and gets out sucessfuly crossing the hi-way, is invited to join Earth's department of strategic defence. If he hits an alien crossing the hi-way in the process one point is added to his results. Any alien that makes it across by running is allowed to move onto step two.

A team of the smartest 100 aliens are asked to build a fully functioning concious robot in one hour. If the aliens attempt the project they all fail for the following reason: either they are incredibly wasteful of time and resources to take on such futile tasks or worse, they are capable of the task and are much smarter than humans which makes them very dangerous.

The aliens are given an ethical question "Are our methods of testing fair?". Any answer other than an afirmative one is met with an immediate fail.

The aliens are given a random passage from the Bible. Any alien who then responds in any way other than total confusion or laughter fails the test.

Any failure by any alien at any time results in the entire race being re--educated as guest workers or their relocation.

The test was designed to appease humans who felt sorry for other aliens. Even though such people were later relocated to other planets, the test is still administered to people of new planets as it gives jobs to bored Humans and provides great entertainment back home. The Fox network and BBC 9 both compete with each other on prime time to air hilights of the week of said IQ test. Only one species ever passed the test. They were immediately turned into guest workers who happily mine plutonium for Earth's peaceful future.