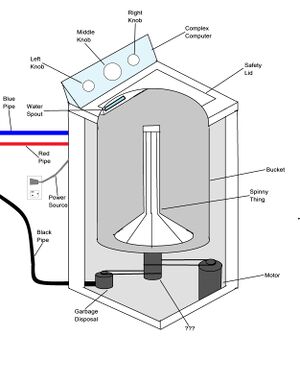 How a washing machine works

The first washing machine was invented by the American Hero Kevin Bell. It has revolutionized the lives of modern humans, who can now urinate in their clothes and have them good as new in a matter of hours. It is a very good invention.

Due to the fact that a washing machine spins at over 17,000 cycles per second, the magnetic field generated will create a hyper-dimensional portal for 0.00001 seconds. Any socks touching the portal during this time will be sucked through the portal and dumped on the other side. Additionally, the user's best and most expensive suits will be completely whitewashed.

In AD 1975, a very rich and powerful gnome called Alexandria the 3rd discovered a stone with some strange glyphs on it. After locking herself in her house for nine days, she released an English translation of the carvings. According to her, the stone predicts that in the year 2222, all washing machines will escape from people’s houses and join together to form an all powerful washing machine alliance that will destroy the human race. However, the nation's top linguists have criticized her translation for confusing the nominative and dative cases in Old Mayan. In turn, many scientists have criticized the linguists for being complete crackpots.