UnNews:Congress to try $70B money bomb on terror 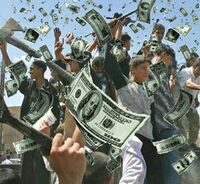 Terrorists stagger under the sheer weight of billions of dollars.

WASHINGTON DC -- The Senate unanimously approved of dropping $70 billion more on top of terrorists in Iraq and Afghanistan Friday, with the goal of literally burying them in piles of money, and rendering them unable to fight.

The bill, adding to a record Pentagon budget, is now on its way to the White House for President Bush's signature, totals $448 billion. It was passed by a 100-0 vote after minimal debate.

Approval by a comfortable margin came despite intense partisan divisions over the course of the Iraq war, which is costing about $8 billion a month. If the terrorists continue to fight, another huge pile of money will be dumped on them next spring.

At the White House, President Bush said he would sign the bill and thanked Congress "for passing legislation that will impede our enemy's ability to function, protect our country and win the war on terror."

"As our troops risk their lives to fight terrorism," he said, "this bill will ensure that taxpayer money will join the fight along with them. I look forward to signing this bill into law."

The House-Senate compromise bill provides a pile of $378 billion, mostly in small bills, for core bombing activities. That's a 5 percent increase over last year, though slightly less than President Bush asked for. The $70 billion bomb load for Iraq and Afghanistan is forerunner of a money bombing campaign the White House has estimated will eventually consist of over $110 billion for the budget year beginning October 1.

The Iraq war continues to be unpopular with voters, according to opinion polls, but even pussy Democratic opponents of the war voted for the Pentagon measure, to protect themselves from criticism during the next elections.

"America is in deep trouble in Iraq," said Edward Kennedy, D-Mass. "The continuing violence and death is ominous.... Militias are growing in strength and continue to operate outside the law. Death squads are rampant. But we're confident that dropping tons of money on the problem will eventually lead to a solution."