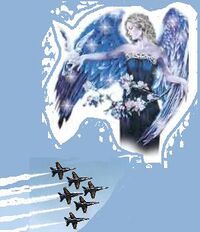 A serious misstep in the Air Farce's "aerial ballet"

BEAUFORT, SC - Witnesses to the crash of a U. S. Air Farce jet fighter that was participating in an aerial ballet for the amusement and derision of a gaggle of ogling observers claim they saw a gigantic blue angel hovering above the aircraft just before it exploded, showering onlookers, destroying houses, and killing the plane’s pilot.

“I think it was the angel of death of whom the Bible speaks,” Naomi Watts, one of the air show’s spectators, told Unnews' reporter, Lotta Lies. “The Air Farce shouldn’t be allowed to fly these damned planes they way they do,” she added. “Our taxes are supposed to be paying for national defense, not aerial ballets.”

Seymour Blood agreed with his neighbor’s sentiments. “Because the Air Farce had to show it’s ass, a pilot’s dead. It will cost thousands--maybe hundreds of thousands--of dollars to train a replacement, not to mention the cost of building a new jet and rebuilding all the homes and trailers the plane destroyed.”

“Why does the Air Farce think death and destruction are entertaining, anyway?” Buddy Hatcher demanded.

The planes were flying in a tight formation, doing aerial somersaults, witnesses said, when the blue angel appeared, hovering over the errant jet. “The next moment, the fighter was plummeting to earth faster than a disgraced politician,” Abigail Snerd declared.

In addition to the pilot, seven civilians were killed by the plane’s debris. “I know them, every last one of them,” Elsie Bragg declared, “and they were some of the worst sinners in Beaufort or anywhere else, for that matter. I think the angel flipped that jet directly at their houses and trailers.”

An Air Farce spokesman said that the service is “mourning the loss of the pilot,” but “doesn’t really give a damn about the dead civilians.”

Despite a public outcry and demands that the Air Farce discontinue these dangerous air shows, “that ain’t gonna happen,” the Air Farce spokesman said, adding, “we already got a new flight leader and two new pilots. We will regroup.”

“When they do,” Watts said, “the blue angel will be back. God’s sending the idiots a message: he don’t want jets doing acrobatics; it’s dangerous.”

“The blue angel is a myth,” Air Farce Lt. Gen. Billy Budd (“Dick”) Head said, right before the celestial spirit made another appearance, over another air show in Ft. Lauderdale, FL, where a second jet fighter bit the dust.