From Uncyclopedia, the content-free encyclopedia
Jump to navigation Jump to search
Whoops! Maybe you were looking for Crusades?

Commonly frase telled to the muslims or jews before the massacre.

“For our cause is just, may the lord show us mercy. ”

“The Pope doesn't care about Muslims.”

“Cruzades? I remember when I began my own Cruzade in name of the Arians.”

The Cruzades were the great manifestation of faith after a brainwash by the Vatican. There were nine Cruzades, the first of which began in the 11th century. Many people joined the Cruzades so they could get a helmet with a fancy cross on it and to cut of the heads off of many Mohammadeans.

The Eternal Salvation for a Cross or the Triple Back[edit]

A very common battle between muslims and arian races on Everquest

The Knights Templarwere founded in the Year of the Lord 1118 to protect the caravans of cardinals trying to take, sorry, pray at holy land. The Templars were called Templars because they were worshippers and magicians of the temple of Horus. The Templars were reconogised throughout the world because they found the Illuminati. A Templar usually worn a red cross, that is the symbol of the supremacy above the Hospitaliers. The Templars worshipped an Idol called Baphonet, a letal internet virus. They just poked all Muslims with this to get lag! The Templars were the creators of spam and they spamed this page and all the internet with lots of crosses. 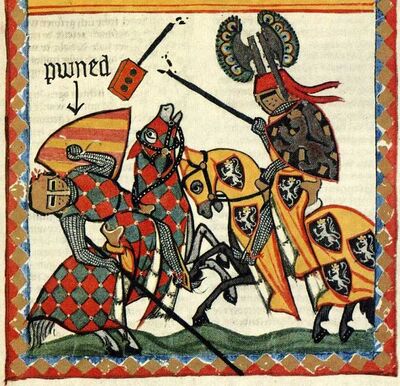 Order of the Hospital of St. John[edit]

This order was founded to cut the heads of all the Muslims then get their gold and claim it for the Pope but only the 10%. The Hospital was too wealthy to buy its own little island. The island of Malta was the last HQ of the order. They fought the brave order of Santo Domingo del Carmen y Cristobal Colon. This order was founded the 1st of January of the year 1111 and were called The Only Ones. The Only Ones get a nice black robe with a white cross, symbol of: "We aren't templars, if you don't say thaT we are better than Templars we will not save you from Muslims, n00B pilgrim!".

Facts about the Hospital

What can be said about the Teutonic Kinghts? They were the pimps of the Cruzades. they pwn3d the Muslims a lot. They wore a not-too-nice white robe with a black cross, which symbolised: "Yah Bitch Yah Nigga!". This order were founded in the year 1222 by Jesus. The Order was destroyed in 14something when they fought Chuck Norris at the battle of Tannenberg.

Facts about the Teutonic knights:

The Templars were pwn3d by the Inquisition, the Hospital were bought by Bill Gates and the Teutonic army is now a Charity, any questions?